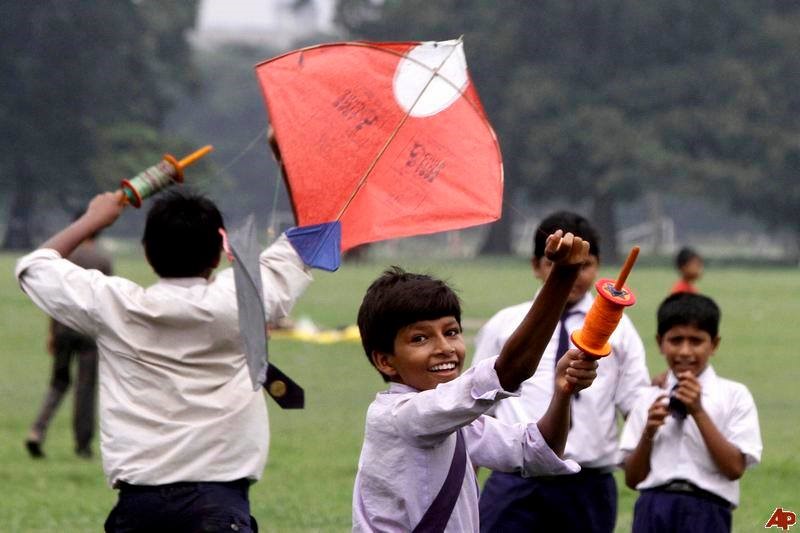 Makar Sankranti is one of India’s most popular harvest festivals. Farmers all over India wait till the months of January-February to harvest their crop and express gratitude to god for the year’s harvest.

The name, “Makar Sankranti” is loosely translated to mean “Capricorn Transition”. Thus, Makar Sankranti is celebrated on the day the sun reaches its southernmost dip and then starts moving northwards.

Makar Sankranti is celebrated all over India, and each region has its own unique celebration. For example, the world’s largest gathering of people, the Kumbh Mela, organized in Allahabad (now Prayagraj) is inaugurated with the first dip on Makar Sankranti. Here’s a good photo album on Kumbh Mela.

Punjab celebrates Sankranti as “Maghi”. Taking an early morning dip in the river is considered an essential part of the Maghi celebrations. The Hindus light Diyas or lamps with sesame seed oil, as it is known to invite prosperity and drive away all sin.

Since Maghi is celebrated during peak winter seasons, the food eaten is very rich and high in calories. Slow-cooked Kheer, Khichdi, Jaggery, etc. are main components of the menu during Maghi celebrations.

“Sankrant” is a big deal in Rajasthan and MP. Sankrant holds a lot of cultural significance in this region and is the main festival of the year.

A part of the traditional celebrations is to gift 13 married woman any household item. A married woman’s first Sankrant has much value – she is invited to her maternal home along with her husband for a huge feast. Sweets such as Til-Gud Laddu (Sesame-Jaggery Laddu) are prepared and distributed among family and friends.

Kite-flying is considered a part of the tradition in this region. The sky is filled with colorful kites, with people of all ages engaging in kite-cutting contests. Sankranti is celebrated as “Pongal” in Tamil Nadu. It is celebrated across four days, with each day dedicated to a different god associated with agriculture.

The first day is celebrated as Bhogi wherein farmers express their gratitude to Lord Indra. The other three days are Thai Pongal, Maattu Pongal and Kaanum Pongal.

Pongal is a delicacy prepared as Prasadam for the deities. It is incredibly simple to make and takes about 30 minutes. On Pongal day, women of each neighborhood come out and cook pongal on the streets, marking a celebration of hope, abundance, and sharing. Women participating in a community pongal-cooking celebration in Dharavi, Mumbai.

Apart from this, devotees at the Konark temple pray with much intensity as the sun starts its northward swing. Apart from the usual traditions, there are also a few unique traditions here. For example, people reaffirm their friendship with their best friends during Sankranti.

Assam celebrates Bihu which signifies the end of the harvesting season for the year. The festivities of Bihu last up to a week and are adorned by bonfires and colorful Rangolis drawn everywhere.

Traditionally, the youth build huts made out of bamboo, leaves, etc., and then feast in those huts. Then, the next morning those huts would be burnt. Assam sees and tastes a lot of delicacies during Bihu – such as a traditional Assamese cake made using Bamboo. Read more about Shunga Pitha

Gujarat sees a lot of vibrance for Sankranti. It is celebrated for two days in this region with the first day being called “Uttarayan”. Skies in major cities are filled with kites of various sizes and shapes. There is a fierce kite cutting competition, and the cord used to fly kites is usually strengthened. A Common Sight in Gujarat Throughout the Month of January

Winters in Gujarat are cold as well, which means that a lot of cold weather food is prepared during Sankranti, ranging from simple snacks like Chikki, to complicated dishes like Undhiyu.

Makar Sankranti is celebrated in Maharashtra for two days. There is a lot of emphasis on community, hence Maharashtrians distribute Til-Gul Laddus, and wish for the other person to utter only sweet words for the year. Apart from these laddus, Maharashtrians also prepare another delicacy called Puran Poli. You can try the recipe for Puran Poli here.

This region views Sankranti as one of the main festivals of the year.

Married women are visited by one of their brothers who brings a gift of warm clothing for her family. She offers sweets to her brother, such as Churma.

For farmers in Karnataka, January-February bring about Suggi, which is the harvest festival celebrated here. In a ritual called Elle Burodhi, girls wear new clothes and visit the homes of friends, family and neighbors with an offering of a small plate of Sankranti offerings. The plate generally consists of white sesame seeds mixed with fried groundnuts, dry coconut and fine cut jaggery.

Among other rituals such as kite flying, one of the most important rituals involves the display of cows and bulls in colorful attire in open fields. The cows are dressed up for the occasion and are taken out for a procession. They are also made to jump over an open fire. This is quite common among farmer communities in rural Karnataka. India’s little neighbor celebrates Sankranti as Maaghe Sankranti. Celebrations involve lots of pomp and show, along with a ton of food cooked as offerings to deities distributed among friends and family. Here’s a very good blog on an authentic Maaghe Sanranti experience in Nepal.

Do add comments about your own cultural practices of celebrating Pongal/Sankranti/Lohri/Bihu. Daana, and all our farmers wish you a very happy Makar Sankranti!